The Clearing of the Fog 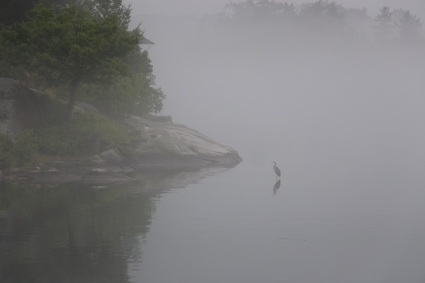 There have been times in my life where there have been heavy difficulties. I have always managed to overcome them but going through the situation, the end seems unattainable. I believe we receive the support and information we need if we open ourselves to all possibilities.

My morning started with my eyes flying open after a terrible dream. It had to do with my job and the lack of safety again in my world.

We just had consultants come in and do a complete evaluation of our agency, new and old, and went thoroughly through the organization. The result was a 175 page report which dictates a complete restructure including the closing of some operations and layoffs. That is all our inept leadership is leaking and it is causing a lot of worry and morale is the worse it has ever been. On top of all this, and because of the foretold future, two vice presidents are leaving; one director who headed up the innovative services (very telling) and they were much revered in their positions. These three people have over 75 years of experience with this agency and are running from the building.

The litany of errors of what is happening is too long to put into words. I am not sure what will happen in the long run. For myself, I do not seem to be in actual harm’s way. Instead, I am being assigned new personnel and growing my responsibilities in oversight of more operations. But the paranoia permeates the building. Those who should be leaving are clinging to a branch hanging over a cliff and are very difficult to work with because of their fear. Those that are leaving are checked out and the support of the daily operations is suffering. It is impacting our clinical human resources at a time when the Medical Center is putting heavier demands on them. I fear we will lose more great people.

Enter in the philosophy of Stuart Wilde. I am reading his books like crazy. Again, ask and the teacher will be delivered. He talks about many theories but I am embracing his concept of “see it, be it and it will be.” Many others have talked about this but his simplistic process seems to resonate with me. He says, plant the thought of what you want. Begin to believe you have what it is you want. Live within the concept like it has already manifested but within your current means. And then forget about it. Do not perseverate. Let it happen.

I am using this in many areas of my life. But for work I believe that things will be fine in the long run. Truthfully, if works goes down the tubes, I will be fine. That is one good thing about being old enough to retire. But I am not ready. I want to see this through. I held a staff meeting on Friday and let my folks vent. I heard them and did not dismiss their worries as that is out of my realm. Instead I offered up that this turmoil was the beginning of a metamorphosis that was inevitable. The agency had been operating in the same way since the 80’s and needed a major shakeup. We get to rebuild the organization and be part of the new agency. I really believe this and I know there are others who also embrace this. It just is going to be a rough patch as things get sorted out.

The place I am struggling is all due to my ego. I see the silliness and ineptitude and I am rendered helpless in making any changes. I have to let that go as it is clearly not my role. My huge ego is pushing me and the conflict is making me physically  worn out. I struggle not to fix things that I know I could. Again, this is the lesson; to let go.

I chose this particular picture today because it is how I feel. It is also my new favorite picture. I took this at the River at 6 am the day we were leaving. I watched as the fog rolled in and bathed everything in its mist. At times it got so thick, you could not see in front of you. And then it just lifted, gone without issue. What was left was pristine and clear.